Earlier this month I spent a weekend in Brighton learning about sand sculpture. Now this is something I have never even seen close up, only photos, and as a sculptor myself I couldn’t imagine how they were done. Now I know, and I’ve had a go myself and can say authoritatively that as sculpture material goes, sand is not at all bad.

But first, if you live anywhere near Brighton, go and take a look yourself. This is actually the first ‘proper’ sand sculpture festival they’ve had. By proper I think I mean where there’s a theme and professional sculptors from all over the world for an intense week of creativity and then head home, leaving a couple of repairers on site in case the odd nose falls off.The festival is organised by Nicola Wood. It’s what she does – so much so that she’s given up her house since she’s always on the move creating these festivals in different parts of the world. She sources the sand (in this case from Redhill since Brighton hasn’t got any sand), finding the right stuff that bonds together properly, decides on the theme, employs the sculptors, teach would-be sculptors like myself, and 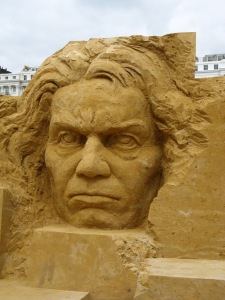 generally ensures that the festival runs smoothly until the whole lot are bulldozed in September.

First the sand has to be compacted so that it’s almost as hard as sandstone. Wooden planks form a removable frame, sand is added gradually, mixed with water, and compressed using a mechanical trench-rammer. More frames are added, building the block into a pyramid shape. For my small-scale sculpture I just jumped on the sand in the frame and banged at it with a wooden block.

Part of Nicola’s job was to find out beforehand which musician the sculptors wanted to do and provide photos so they could get a likeness. And do they ever! The portrait of Beethoven was utterly wonderful, I thought. My favourite of the whole show, but then I know what Beethoven looks like, whereas most of the pop musicians remained a mystery to me even after I was told their names. Still, Bob Marley was certainly recognisable by his dreadlocks, and Elvis with flairs.

Because sand is soft, tools can be anything the sculptor chooses. You don’t need chisels. Almost everyone worked with a plastering tool and anything else that they fancied such as palette knives, spoons and so on.

I’d given a bit of thought as to what I would carve. I didn’t want to do a portrait because I’m rubbish at people, though I did consider doing Leonard Cohen since I reckoned he should be there. I sculpt animals, so I thought that “Elephant blowing its own trumpet” would be doable and in keeping with the music theme. It went fine until the trunk and trumpet fell off. So the finished sculpture is “Elephant about to blow its own trumpet” in an altogether less ambitious pose.

I wonder if it’s still there? 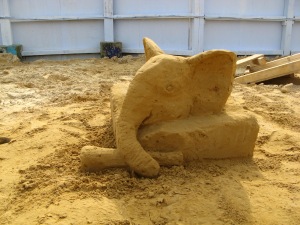