“I’ll tell you something about guinea pigs” said Martin, when he gave me my first one, Rico, around 30 years ago. “They’re nicest the year that they die”. And it’s true. As prey animals, guinea pigs are naturally timid, and it’s only when they near the end of their life expectancy of five or six years that they become very tame. So it was with Rosie and Gingerbread, my two favourites. Their deaths, 15 years apart, were as quick and painless as possible and, perhaps, tell us something about a good death.

Rosie first. She was the sole survivor of the Great Guinea Pig Massacre which took place on my 60th birthday (bad timing, Mr Weasel). Rosie was the daughter of Pepper who I bought as a companion for Chica who was lonely. Pepper was only a few weeks old but already, I’m sorry to say, pregnant. And who was the father? Her father. But I didn’t know that she was expecting until her ‘love handles’ started to wriggle and her nipples enlarged. She gave birth to three babies, perfect furry, eyes-open replicas of adults. Two brown, like Pepper, and one startlingly white and fuzzy. I kept the two females: the fuzzy white one, Selvi, and Rosie, named after the one rosette she had inherited from her mother. Once the babies were big enough, I built a large enclosure for them on the lawn, with lots of room to run around.  They lived there during the summer and their hutch on my balcony in the winter, a happy foursome until a predator, probably a weasel or stoat, found its way into the run and killed three of them. I found two corpses still in the enclosure, and one in the garden. I assumed Rosie had been dragged away and eaten, so you can imagine my delight when I found her, safe and sound, in the wooden bedroom where they used to spend the night. 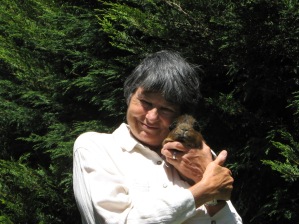 I bought two more companions for Rosie, and was given a third, so I was back to a foursome. Now they spent each night safe on my balcony, with access to the hutch, and got used to the routine of their favourite treats for breakfast. Always lots of squeaking when they heard the door open. At six,  Rosie was a typical old lady, a bit arthritic, eyes somewhat sunken, and no doubt lots of wrinkles under her fur. Then the morning came that I could see what an effort it was for her to join the others for their breakfast snack. But she toddled along , sniffed the celery and carrot, but didn’t eat. Suddenly she squealed, ran to the hutch, keeled over and died. And that, I believe, is typical of a prey animal – run towards safety when you sense the end is near. But to me, it was almost as though she saw the Grim Reaper… 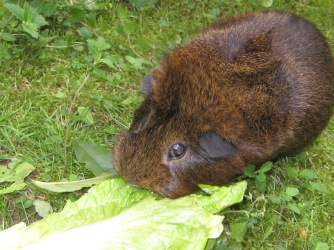 During the next 15 years guinea pigs came and went, but the most recent deaths were the most affecting because of the comfort – and there’s no other word for it – that the dying guinea pig’s companions provided. Shortly before Christmas, Cappuccino became ill. She had trouble eating, but the vet could find nothing wrong with her teeth. A bit overgrown, perhaps, so she cut them shorter (ouch) and for a while Cap did quite well with all her food grated, but she clearly wasn’t going to recover. I had the dilemma of whether to have her put to sleep (kindest for her) but there was her companion Gingerbread to consider. 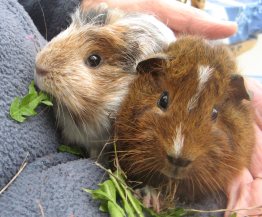 They’d lived together for five years, never much liking each other but never able to bear separation. Ginger wouldn’t let Cappuccino sleep in the bedroom (or maybe Cap decided she’d prefer separate rooms). I felt that if Cap was going to die, Ginger should be there at the death. And it was the right decision. Cap faded away, and during the last two days Ginger cuddled up to her in the bedroom, only leaving her to have a quick snack. I’d never seen them sleep together before, and I knew from Ginger’s uneasy behaviour when Cappuccino had died.

The next few days were poignant. Each day I’d put Ginger out into the run and she would barely move from her box. Certainly not her usual greedy self; normally she couldn’t wait to start eating the grass. And when I put her back in the hutch instead of seeing what was for dinner she always went into the bedroom looking for Cappuccino.

I hadn’t been sure about starting the whole guinea pig cycle again so advertised for an elderly companion and tried the local small animal rescue centre. No luck. So I bought babies Treacle and Smudge. 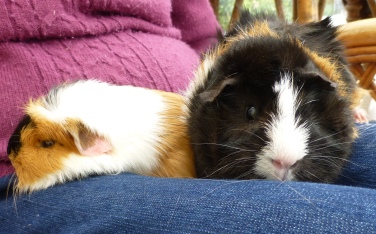 I had no idea how Ginger would take to them, or they to her, and kept them separate for the first day, but where they could see and smell each other. Then I put them all together and Ginger was transformed into a caring but very bossy granny. She mentored the two little ones, showing them what to do in the outside run, when to expect a treat, and that I might be a bit of an ogre but there were compensations.  She wouldn’t allow them to share her sleeping quarters – I had to provide an extra box so they could sleep apart.

Then, last week, Ginger suddenly stopped eating, turned her face to the wall, and was dead in two days. Very sad, but it was the reaction of the little ones that was so affecting. When she first became ill I put her out (in her box) in the run with the others but she didn’t want to eat grass. Or anything. And Treacle and Smudge didn’t know what to do. They’d never come out of the box before without Ginger leading the way, so they stayed with her until hunger drove them out for brief sorties.

I put them indoors earlier than usual, and in the evening I thought I should try to give her some water with an eye dropper. I opened the bedroom lid and there were the three of them in such a tight huddle I couldn’t see where one piggy began and the other ended; except that Ginger was in the middle. Next morning she was dead.

I buried her next to Cappuccino, with my robin in attendance, and a few lines from Hamlet: ‘Lay her in the earth and from her fair and unpolluted flesh may violets spring’.

For the next few days Treacle and Smudge were bereft. They stayed in their box rather than eating the grass when in the run, and they looked for Ginger when I put them back in their night quarters. They are gradually behaving more normally but have lost the tameness that they gained in Ginger’s company. There’s no doubt that they’re still missing her.

There’s no pretending that guinea pigs are bright, they’re not, but as social animals they do pretty well and they can, perhaps, teach us what matters at the end of life. 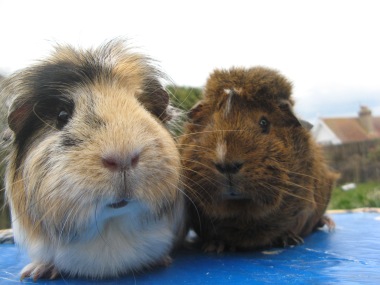